Is there jazz on Mars?

The answer comes right up: there sure is! Although I’m certain that one day there will be articles written about jazz from our neighboring planet that humans still did not set foot on, for the time being we are still referring to Earth’s Mars from the south of France. The one and only Marseille. The city in which jazz giants like Louis Armstrong, Dizzy Gillespie and Charlie Parker walked in the 40’s, where the serious rivalry in the clubs between classic and modern jazz (bebop) lasted during the 50’s, and indelible prints were left by the “aliens” Powell Ellington, Oscar Peterson, Thelonious Monk and Miles Davis (check out the short history of jazz in Marseille). 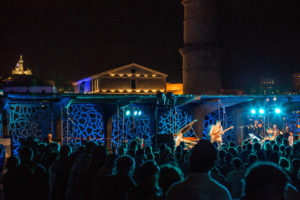 The person that was in charge for bringing the key jazz players from America and for organizing concerts in this part of Provence by the end of the 60’s was Roger Luccioni – a doctor and an extraordinary double bass jazz player. In 2000., along with Bernard Soroque, he brought up one of today’s most significant jazz festivals in France – Marseille Jazz Des Cinq Continents (Marseille Jazz of Five Continents). Whether it is popular, modern or jazz combined with world music – there is no significant musician who did not play in this festival, ranging from the cult names of jazz and blues (Herbie Hencock, Chick Corea, George Benson, Ana Popovic, Norah Jones, Youssu N’Dour… to mention a few) to the ones that will be spoken about in the years to come.

Next summer Five Continents will be held for the 20th time but the city of Marseille will not be sleeping until then, because November is already full of surprises. What kind of sounds will color the autumn on Côte d’Azur and how does the Festival reflect the world of today according to the artistic director Hughes Kieffer? Find out in the interview and check out the playlist at the end!

ClassicAll : Marseille is a city that proudly boasts with its rich jazz tradition that started in the years between two wars, a city that introduced jazz into the Conservatoire National in 1964. How did the Jazz Festival of Five Continets start? 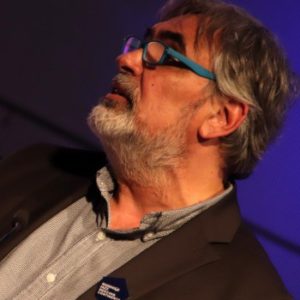 Hughes Kieffer: You are right. There is a history with jazz music in Marseille. The founder of Marseille Jazz Des Cinq Continents, Roger Luccioni was part of this history. He was a member of the city government in charge of the museums and libraries, he was an eminent doctor, director of the cardiology department in the biggest hospital in Marseille and most importantly for us he was a double bass player. When he was a student, he participated to make Jazz music very popular in Marseille, playing with friends in the bars and in private courtyards and caves. And he was one of the people most involved in welcoming American musicians in Marseille’s theaters. He was a passionate man and he struggled during many years to build a festival in Marseille. That’s what he did in 2000 when he met Bernard Souroque who was the first artistic director of the Festival, the one who created the concept of Jazz Des Cinq Continents.

How much did the festival grow and how much has it changed since it had started?

We were much smaller back then comparing to now. Very ambitious but young and new… and unprepared! Everything has changed, we are on the same road but far ahead from our beginnings. Jazz music was music for a selected few back then, and those people were not very satisfied to consider jazz as an open music, a music that is able to connect with electro music, techno or urban music, even with world music. In that point of view Bernard was a visionary. My responsibility is to make this concept grow, continue to invite the best jazz musicians to Marseille and keep on following the new tendency and help them to open up. The very special difference between us and the others is the City of Marseille ! Like nowhere else.

During the Football World Cup in 1998, the City of Marseille organized a dozen concerts. How was it this year when France won the World Cup?

Besides this, it seems that there isn’t a month in Marseille without a good jazz gig! Marseille Jazz of Five Continents lasts for 10 days in July, however, jazz concerts are being held during the whole year, in autumn, winter, spring…  Where can one usually hear good jazz in Marseille?

There are a few places like jazz clubs in Marseille where you can have a drink or two and listen to jazz music. And in the last few years, the theaters of the city, like La Criée or Le Gymnase, le Merlan, program more jazz in their season. And most of all there are places like Le Cri du port or Charlie Jazz specialized in jazz only. During November there is a special Jazz program everywhere in town called “Jazz sur la Ville”.

This autumn, Vincent Strazieri Sextet will perform on 29th November and the audience will also have the opportunity to hear Tigran Hamasyan on 1st of December. However, there is one special project coming soon – a jazz opera ! Tell us more about this idea.

The importance of Vladimir Cosma for french cinema can be compared to the one John Williams has for American movies, and the moment you hear his music – you fall in love permanently. French composer of Romanian origin, arrived in Paris in ’63. (after his studies at Bucharest Conservatorium were finished) and continued his studies in the class of famous Nadia Boulanger. Besides his classical education, he was interested in various musical styles – jazz and folklore of different nations. Thanks to this, he developed his unique and recognizable way of composing that makes film stories more effective and his music touching long after the plot from the screen has been forgotten. His warm melodies evoke nostalgia even when heard for the first time, and a peculiar closeness to the listener, no matter if it is Baker’s Sentimental walk, a movie theme sung by Nana Mouskuri played by Symphonic Orchestra or a piece by George Zamfir.

Marius et Fanny, a comic opera in two acts by Cosma, is based on a famous Mareseille Trilogy Marius, Fanny and Cesar by Marcel Pagnol and was premiered in 2007. (back in the 30’s Alexander Korda made three movies based on these titles, and in 2013. Daniel Auteuil signs the remake
Marius et Fanny as a director). By the end of 2018., during two exceptional evenings on December 20th and 21st, the visitors of the once old industrial building turned into a modern hall Silo, will have the opportunity to remind themselves of the well known love ravel that unfolds in the Old Port of Marseille. Cosma’s music arranged in collaboration with Antoine Hervé, more than 30 singers on the scene including names like Hugh Coltman, Irina Baïant, André Minvielle, Tom Novembre (comedian and singer crooner) will be a certain guarantee for the music spectacle of the year!

“Marius et Fanny”, a jazz opera composed by Vladimir Cosma. This is a creation around a typical love story of Marseille written by Marcel Pagnol. 2 hours of jazz, songs and music, played by singers and a Big Band. This project came up because of MP 2018 Quel Amour! Marseille celebrated the 5th anniversary of Marseille European capital of Culture 2013 and the theme was l’amour. Each promoter in culture proposed a program or a project about or around love. Marseille proposed three projects, an exhibition at The Art center of La Vieille Charité called “Jazz&Love” from July 12 to September 30, a huge concert that was held for the opening night of the 19h edition of our Festival – Thomas de Pourquery and 100 musicians on stage for a gig called “ Sons of love XXL” and finally, “Marius et Fanny”.

More than 400 musicians have passed through Marseille on this year’s festival! What are the plans for 20th edition?

I would like to honor Bernard Souroque and Roger Luccioni by programming musicians from their aspirations. That means Cuban and Spanish tendencies for Bernard, muy caliente ! And jazz classics and American musicians for Roger… Jazz is not dead! And I will continue to attempt to make Marseille Jazz a reflection of the world of today. A reflection of what is going on around our planet!

Is there a chance for someone from the Balkan to play again soon on Five Continents stage?

Of course, I’m still looking at and listening to the new artists, beyond Goran Bregovic, Bojan Z and Ana Popovic.

When did you first get “infected’’ by jazz?

My first jazz concert, I was 14 years old an my older brother brought me to a concert of Terje Rypdal, I didn’t know it was jazz music. The first album I’ve heard and that blew my mind was “the Köln Concert” just before discovering “bitches brew” and Weather Report, then things were engaged.

What makes you proud the most?

That we are a team with the same commitment, involved in a common spirit. And when I can feel the feedback from the musicians or their management, the technicians, but also the audience, the journalists, people from all trades of culture, my friends from other festivals… When all of them say that something new is happening in Marseille.

What are the hardest and the best moments in this job?

The best moment is when you dream of a line up and everything else is the hardest.

You’ve  invited the audience to come to the Festival in a note saying that it is necessary to move, to find one’s place, to be present at live concerts. How does the Jazz of Five Continents help people orient?

This is my responsibility, I work hard for this and I’m not alone, we are a team and we are part of a movement with many friends all around. The best sign is the feedback from the artists and from the audience. There is no doubt about it, the truth comes from the  outside, if we are on a good way, we know it immediately and if we are not this is very clear too. The ones that are wrong are those who do not open their ears to the feedback. They are alone and isolated…please keep me from ever becoming this way, it is not the path I want to follow! The live music is the best.

Some of the biggest jazz names performed on Five Continents, but also young artists with careers in front of them. We asked Mr. Kieffer who would he recommend and who is not to be missed! Based on his answers of more than dozen names (“But this is only a few names !!! Keep on searching!”, he said) we made a playlist that maybe represents his idea – for Marseille jazz to become a refection of the world today – in the best way possible.