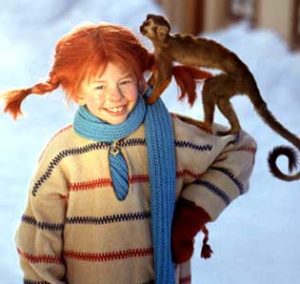 Everyone has heard of the redheaded girl with freckles, kittens and two different socks. It’s Pippi Longstocking, of course. However, I wonder at which degree are the children of today familiar with her qualities besides the obvious ones? Would someone mention the vivid imagination of the most independent girl in the world which has helped her outwit much older and educated people many times? Furthermore, her supernatural strength that enabled her to carry with ease the horse or her father on her shoulders or to beat up a shark! Pippi Longstocking is the strongest girl in the world!

Among plenty of other descriptions, maybe the most important one is that Pippi was the girl every kid in Little Town adored, which is not so easily achievable at a young age. Although a child herself, she was somehow more independent and ’ more grown-up’ because circumstantially she did not lead the standard way of living. She didn’t have a mother, and after spending a part of her life on a ship, sailing the distant seas with her father, captain Longstocking, Pippi lived alone in the house her dad bought for her – villa Villlekulla. Well, not exactly alone. To be more precise her family members were a cute little monkey called Mr. Nilson and a unique nameless horse who lives on the porch (logically, because ‘’in the kitchen he would just get in the way, and he doesn’t feel comfortable in the living room’’).

She is also always accompanied by her friends Tomi and Anika – a brother and a sister who have all the characteristics of well-mannered and obedient Swedish children, unlike Pippi who breaks all the rules wherever she shows up. However, her misbehaving is not a regular type of naughtiness. She simply notices very well the imperfections and the bad sides of the world of grownups, and she doesn’t try to accept it at all. Instead, she imposes her system of values and when talking with older ladies and gentlemen, she often gives them ‘’the bloody nose’’, which is, as you might have guessed, not quite welcomed with excitement. Generally, she considers being a grown-up not something you would wish for. An ideal life, as her peers would come to think – no one to boss you around, you being the master of your life! But it is not quite so, because Pippi is often taking over the role of an adult and, deprived of the warmth of a family home, she makes all kinds of surprises for her friends and brings them joy. One of the numerous examples was preparing the New Year’s Eve in January, since her, Tomi and Anika got back too late for the real thing, coming home all the way from the South Seas. At the end of the day, Pippi is left alone with her thoughts, blows out the candle and presumably goes to sleep. 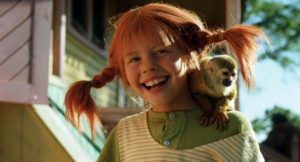 This charming little rebel with a gentle heart actually represents a metaphor for all the things we would like to do, and we don’t find enough courage; the way we would like to live, but the social norms are not allowing us to. That is why it is wonderful to have her in our lives, at least as a book character, if not our own real ‘’Pippi’’ who we’ve admired from childhood and trusted unconditionally. Even when she convinced us that the three grains of bean were magic pills that prevent us from growing if we drink them in the right way! Maybe we used to be just like her, when suddenly at one moment not even noticing, we woke up as adults. What person would Pippi turn out to be in case the pills didn’t work and she actually got older?

Maybe it is not a bad idea to try her experiment at the beginning of the New Year, or some similar if you had one. You will not become a child again, but at the moment that grain of bean slips down your throat, you will remember for sure that goofy feeling you had when you were about 10 or 12. If not that, there is always that trick you can do when you lay down – put the pillow under your feet, instead of your head. While daydreaming in an ‘’upside-down style’’ with tossing and turning the images from your gallery of memories, your ‘’Little self’’ will most certainly come around again! Maybe it will not stay for long, but it is comforting to know that it is here when there’s a need to restore hope to the world.

Robert Schumann (1810-1856) was a composer who dedicated a significant part of his opus to children. Album for the young that he composed for his daughters, is for an example an excellent choice for young future pianists. However, Schumann also wrote the famous ’’Scenes from childhood’’ (Kinderszenen) which he dedicated to mature performers. Schumann composed his 13 piano pieces when he was 28, at a period of his life when he was remembering his childhood days and reminiscing the scenes from the past. Of course, young students can also play them as they do with technically more demanding repertoire, but the complexity of this pieces lays in the emotion which cannot be expressed entirely when you are still a child. That does not mean that everyone – children and grownups – are deprived of genuinely enjoying while listening to them. Especially when it comes to the most famous and absolutely wonderful ‘’Dreaming’’ (Traumerei) – a tender lullaby for your child or perfect background music for fantasizing if you are a bit older.