He wakes up, still sleepy and rheumy-eyed, and talks about how he flew above the village the whole night, looking at the roofs under the snow and the church, yellow with blue domes, street cleaners, and hunched passers-by…He 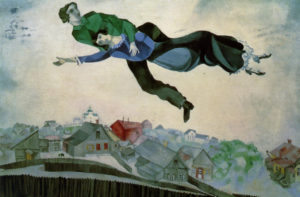 speaks without stopping. His mother shuts him up unwilling to admit to herself how scared she is. He is too sensitive, weak, prone to fantasies… how will he ever fight in world like this, full of thorns and weed?
’Moshe, hush, what are you talking about?’, she interrupts him while her throat tightens. She would like nothing more than to tell her eldest child that life is too real to be colored: ’What would your father say if he heard you?’

She hopes something sensible will become of him – a bookkeeper or a salesman…however, when she looks in her son’s eyes, she can feel it – there is something inside him so different; to the extent that she doesn’t know whether she should thank God or curse Him for it.

When, on a cold morning, the excited boy tells his mother that he met, while floating on the clear moonlight, a strange man with the crooked hat who was swinging while playing the violin, she – a humble and religious woman – decides to stop it right away. When the night comes, she leaves the younger children and ties the ankle of her firstborn to the bed with a soft white ribbon. Ashamed of what she does, she hopes that no one will see her, but she cannot rid herself of that anxiety. She stays awake the whole night. Before dawn, when a deceptive sun rises above Vitebsk, the mother runs into the room and finds his son fast asleep. She releases a sigh of relief before noticing that the ribbon tied to his leg was gone. She looks for it under the bed, in the sheets. Moshe awakens and asks his mother what is happening. ’Go to sleep’, she whispers and starts getting dressed. She runs outside, initially looking around her and then in the direction of the treetops. On a branch of a barren tree, high above her, the rest of her white ribbon flaunts.

While she muffles her scream – we wonder if the pictures of a better tomorrow are flying in front of her eyes? A tomorrow where rubles will roll on the floor, the rubles her husband would give to his eldest child for painting lessons, by throwing them bitterly on the flour – is she perhaps visualizing the moment when she will stand beside the bread oven when Moshe tells her that he wants to become a painter?

Should she have sensed that her son, Marc Chagall, would become one of the biggest painters of the 20th century whose paintings are music itself and best described as an explosion of colors?

Chagall loved music, and out of each of his loves – be it his love towards his first wife Bela, the place he grew up or all the things he did – comes out so much fascinating passion that it is enough to create a whole universe. A devotee of Bach and Mozart, but also influenced by the little Hasidic Jewish community he belonged and the music he heard there.

He painted the Paris Opera ceiling, while the French public objected to how a Russian Jew and moreover an avant-garde artist paints the French monument. He created the small murals for the Metropolitan Opera in New York. He is the maker of ballet costumes whose replicas are still being used to this very day, 68 years later.

Chagall’s friend, Pablo Picasso would say that since Renoir no one had the feel for light the way Chagall did. To this remark, Chagall answered: ’what a genius, that Picasso! Too bad he doesn’t paint!’

The sickly boy from Vitebsk kept flying his whole life.

Music: ”Serenade to Spring” from the album ”Songs from a Secret Garden”