Whether you have decided to spend the summer at home or you’ve just recently gotten back from your vacation (and returning to the everyday life was hard) we recommend spending one hot afternoon with the series of Woody Alan films, located in some of the most beautiful cities of Europe. Easy summer movies, that show only seemingly simple human stories, will take you through the streets of Paris along with the french jazz and cabaret, Rome resonating with arias like Traviata, Pagliazzi and Tosca, or Barcelona seasoned with the Spanish guitar. 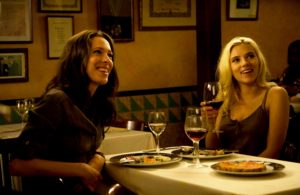 It’s exactly 10 years this summer since the movie Vicky Cristina Barcelona came out. I remember how, being a great fan of Spain and Barcelona, I ran to the movies to find out what will happen with two best friends (Rebecca Hall and Scarlet Johanson) which decide to spend the summer there. The plot becomes interesting when the lead male character shows up – Juan Antonio (Javier Bardem) who will completely shake up Vicky (impresionation of rationality and formalistic way of thinking) and Cristina (unconventional and adventurous). Through the entire movie, the main characters, reinforced with the fantastic Penelope Cruz (Juan Antonio’s ex wife) are trying to find the answers to all the questions that are bothering  them, at the same time pulling us into a whirlpool of interesting topics worth thinking about. Should we always listen to our inner instinct or should we succumb to socially acceptable standards? What is right and does it really exist as such? Is there a perfect emotional relationship?

Every event in the movie is accompanied by the carefully chosen music numbers, which emphasize the dominant emotions of main characters. The opening theme of the movie is the peculiar Barcelona, performed by an indie band Giulia y Los Tellarini. This song came out in 2006. on the album Eusebio, and the members of the band probably could not imagine that two years later it will take such a great part in Woody Alan’s movie. One of the most impressive scenes in the movie is the one when Vicky is enchanted by the sounds of Andalusian flamenco. Everything melts and disappears with the tones of Albeniz’s Asturias, and she is left lost in her own thoughts. It is interesting that this piece was originally written for piano and only later transcribed for guitar. In the movie, the theme of Asturias will become the motif of passion awakening, doubt and inconsistency.

Once more will Isaac Albeniz’s music leave Vicky speechless, but this time because of his romantic Granada (one of the most famous guitar pieces, also composed primarily for piano). This theme is the most dominant background color which paints the main feeling of the movie. It can be heard, almost always, in the scenes when the members of this love triangle question their acts, trying to find the right answers. It has the role of ‘’flaring’’ the passion, but it also evokes romantic and sometimes nostalgic feelings. 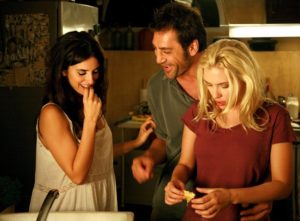 Putting classical guitar aside for a moment,  the turbulent summer in Spain is unimaginable without the burst of flamenco. We can recognize Huan Serano’s Gorrion in the scenes when sparks from strings spur the awakening of all senses, emphasizing the electricity of the passionate Bardem-Cruz-Johanson trio, but also their process of maturing and self-knowledge. Another piece that makes the playlist of Barcelona complete is Paco De Lucia’s upswing rhumba Entre dos aguas. Considering Woody Alan’s devotion to even the smallest details, it is probably not an accident that he had chosen the wondering ”between two waters” as the convenient metaphor for emotional turmoil. In the recognizable woody alan context, Entre dos aguas sets free even more passion and explosion then usual – completely opposite to the melancholic Albeniz from the beginning. 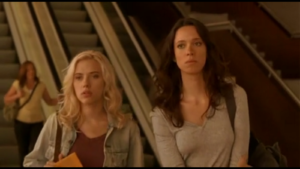 One of the most inspiring compositions in the movie, that wonderfully sublimes romance and passion, is the Big Brother by Stephane Wrembel trio. This gypsy jazz theme follows the rush of inspiration and the opening of the new possibilities while being wrapped in the complicated love relations. However,  that special kind of enlightenment is not to be reached at the end of the movie. Further more, the final return home of the two friends  will bring a quite confused feeling and slightly depressive cognition that life goes back to its course, continuing just where it has stopped at the beginning of the summer.

While Vicky and Cristina are coming out of the airport with scattered thoughts, Barcelona is following them once more with the tempting voice that almost whispers to them, evoking the picture of the city that is dangerous to let go to – how wonderful would your sea be, if only I could know how to swim…