The concert of the young musicians that are coming to Serbia for the first time from a faraway prince’s land called Lichtenstein was described as the ‘’youth music tsunami’’’. This very announcement was enough to gather a selected audience in Opera and Theatre Madlenianum on April 25th, which will, not knowing exactly what to expect, eventually give in to the tide of youth energy and sail on the wave of the extraordinary music for two full hours. We are talking about a concert of Young soloists LGT consisting of about 15 members from all over the world – Switzerland, Russia, Austria, Israel, Poland, Netherlands, Great Britain, and Serbia. This string orchestra has recently released a CD Nordic dream with the pieces from Scandinavian composers, so the beginning of the Zemun concert started with the burst of northern freshness and clearness characteristic for the music for this area – whether it is Grieg, Sibelius or in this case the Swedish composer Dag Wiren. 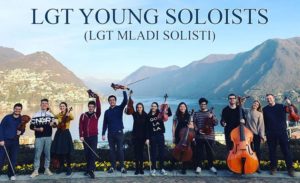 Although the audience eager to reward the artists interrupted them more than once with ill-timed applause, the ’’northern dream’’ was dreamt with a smile – with a verve introduction, perfectly equable pizzicato and energetic rhythms reminding of the American ones that once inspired Dvorak. From the very start, it was clear that we are faced with a team of exquisite young artists, and by the end of the concert it would be obvious why the Vienna ’’Klassik Heute’’ has already placed them ’’among the upper leagues of music’’. While the last tone of Wiren’s Serenade slowly disappeared, the blue coming from the scene was suggesting a new awakening, this time under a German sky. The music of Paul Hindemith for viola and orchestra was presented by the first soloist – Anna Krzyzak, who with the warm viola color along with the ensemble, showed all the gentleness and sharp lines of Hindemit’s Trauersmusik. As a counterweight to the German ’’objectivity’’ the passion of Spain and one of the most favorite pieces for violinists and audience as well – Waxman’s Carmen Fantasy was performed next. The soloist Leo Esselson, with a confidence of a far more experienced artist was brilliantly playing with the virtuoso passages and the lavish themes from Bizet’s opera.

After the ‘blue’ segment of the concert and the brief pause, the next segment that will be covered in red nuances of the scene followed. Maybe not by accident – the first piece that was heard was Tartini’s Devil’s Trill. If there is an imaginary bar that every musician strives to while performing, Christa Maria Stangorra has raised it significantly. Even though baroque might not be too familiar to the ear of the 21st Century, it has the unique power to uplift the listeners, and in the case of Tartini’s sonata – to leave the audience speechless if performed properly. The aforementioned artist did exactly that with her powerful interpretation and expressiveness in the solo part that, resembling the ‘finger-breaking’ guitarist improvisations, took our breath away and made us imagine Tartini as the ‘pre-predecessor’ of the ‘devilish’ rock music.

Before approaching the end, LGT leads us into the music world of Gustav Holst with his St. Paul’s Suite – the cheerful and playful C major highlights the musicality and compliance of the young ensemble, followed by an obvious enjoyment of their creation. The great part of LGT success lays in the fact that every individual is completely taken by the music and at the same time the feeling of communion is never lost. The credit for that relationship of trust, I suppose, goes mostly to Alexander Gilman, the first violin and the artistic director, that suggestively leads the orchestra. That was the case in the last number of the official program – Botessini’s Gran duo concertante. Just the right choice for the end of this string fantasy in which the soloists David Nebel and Dusan Kostic showed in full splendor how the smallest and the biggest instrument of the ensemble can technically and melodically ‘compete’ and complement each tier.

One of the dominant impressions from this concert, besides the music, of course, is the already aforementioned young age of the ensemble members. It is not noticeable in their child-like appearance although some of them are teenagers – it manifests in the complete musical fervor which is the most distinctive in that, not yet completely mature time of life. The insatiable will to play and conquer the audience was proven with every new encore – there were four of them and they were no joke – Paganini’s Variations on Theme Moses in Egypt, Kreisler, Sarasate, and the fantastic modern piece by Solima – Violoncelles, Vibrez!

With the last twitch of the cords, the tsunami has passed, leaving behind a polarized silence.